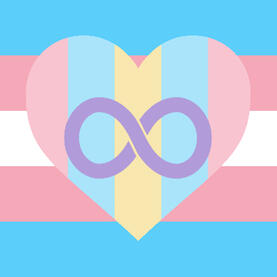 Nondysphoric trans carrd that will constantly be updated because I'm always answering the same questions!

What is gender dysphoria?

To be diagnosed with gender dysphoria as a teenager or adult, you must have experienced significant distress for at least six months due to at least two of the following:

How are you trans without dysphoria?

Gender incongruence. You can feel as if your assigned gender at birth (AGAB) doesn't match your gender identity without being distressed by that incongruence. For example; you know what your gender is regardless of how your body looks or the anatomy it has. Being trans without dysphoria just means that our anatomy and trans-ness doesn't cause significant distress, it doesn't mean we identify with or feel connected to our AGAB. Nondysphoric trans people usually feel disconnected to our AGAB and instead feel joy and connection to another gender, rather than being distressed by the one assigned to us at birth.

Don't you need a dysphoria diagnosis to be transgender?

A psychological state is considered a mental disorder only if it causes significant distress or disability. Many transgender people do not experience their gender as distressing or disabling, which implies that identifying as transgender does not constitute a mental disorder. For these individuals, the significant problem is finding affordable resources, such as counseling, hormone therapy, medical procedures and the social support necessary to freely express their gender identity and minimize discrimination. Many other obstacles may lead to distress, including a lack of acceptance within society, direct or indirect experiences with discrimination, or assault. These experiences may lead many transgender people to suffer with anxiety, depression or related disorders at higher rates than nontransgender persons. According to the Diagnostic and Statistical Manual of Mental Disorders (DSM-5), people who experience intense, persistent gender incongruence can be given the diagnosis of "gender dysphoria." source

Then why do you want to transition?

Some of us don't want to medically transition and that's ok, but some of us do. Nondysphoric trans people, while not being distressed or uncomfortable with our bodies, may feel gender euphoria by presenting in a way that matches our identity. You don't have to hate fruit to prefer chocolate, do you?

Are you choosing to be trans?

Not necessarily! While gender incongruence is a common factor into gender dysphoria, they aren't always the same thing.

Gender dysphoria is a term that describes a sense of unease that a person may have because of a mismatch between their biological sex and their gender identity. source

But I think incongruence and dysphoria are the same thing!